History was made this week—but NOT the way meteorologists expected.  Record snowfalls were predicted in a seemingly endless (and tedious) loop on every news station all weekend.  In anticipation of an overnight snowfall of two to three feet, Governor Cuomo and Mayor De Blasio shut down New York City at 11 PM Monday night.  No more subways or buses until further notice.  All non-emergency vehicles were forbidden access to roads in preparation for the army of trucks and ploughs necessary to  cart off the soon-to-be perilously mounting piles of snow. For the first time I can remember, schools were closed the night before (instead of early in the morning) to the delight of all city children. But before kids could pull out their sleds—alas—Central Park also closed, for fear of falling tree branches under the weight of all that snow.  In fact, our mayor, ersatz nanny-and-principal, urged everyone  to leave work early, go home, and stay inside. “Duh!” Anyone looking out the window Monday afternoon didn’t need much convincing.

However, before we plucky and practical New Yorkers decide to batten down our hatches, turn up the heat in our apartments, and hunker down for the duration, we have to prepare for this mother of all storms, right?  Everyone—and I do mean everyone—ran to the supermarket.  Who knew how long the Big Apple would be shut down?  How would our groceries get delivered with two feet of snow on our streets?  At 2 PM on Monday, I hurried to Food Emporium where I found every shopping cart taken and people waiting to pounce on an empty one as soon as it got unloaded.  Even after I succeeded in snagging a precious wagon, navigating the crowded supermarket turned out to be quite a challenge. Is this what it would be like if there were an impending nuclear holocaust?  Or had I wandered into an episode of The Walking Dead? 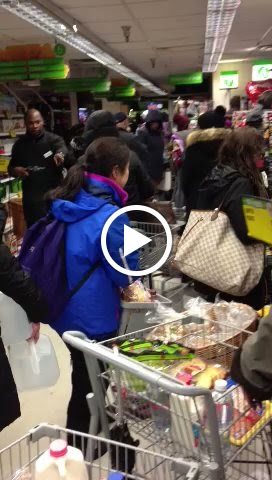 Quick, quick, grab the Bumble Bee tuna packed in water for Sarah’s diet, I silently chanted, willing myself through the human labyrinth.  Oh NO, all that’s left on an almost-empty shelf of tuna is the high calorie Bumble Bee soaked in oil.  Crouching down to the bottom shelf, looking deep into the  back, I managed to spot and grab a lone four-pack of Star-Kist tuna in water.  Phew!

Time to captain my wobbly-wheeled, metal cart toward the beverage aisle.  I checked my list for the Elisofon preferred sodas and waters.  In shock and chagrin, I discovered that competing shoppers had already scooped up every last small bottle of plain Perrier and Poland Spring.  All that was left were lemon and lime flavors nobody in my family likes. Quickly, I grabbed a few large plain bottles and threw in the last 12-pack of Pellegrino—not my preferred brand—but, hey beggars trapped by Mother Nature can’t be choosers.  At least there was plenty of Fiji water, Henry’s favorite.

I’d have fled the market at that point, but we still needed eggs, cheese and cold cuts.  In the dairy section, more bad news awaited me.  Forget about jumbo or extra-large eggs.   Only the “large” eggs remained, (by comparison, these tended to be quite small) but scrambled eggs on Saturday are a must, so I carefully perched a carton of scrawny eggs on top of the other necessities in my wagon.  En route to the cold cuts counter, I scooped up a wedge of Jarlsberg, leaving only one more wedge on the counter.  (Normally, there was a pile of 20 or 30 hunks in various sizes.) Next, attempting to approach the cold cuts area, I encountered a seemingly endless line of shoppers waiting to check out. The cold cut counter was completely obliterated by the throbbing, impatient masses wanting to pay and escape the market.

“Excuse me.” Gingerly, I slipped into the crowd, reassuring everyone that I wasn’t cutting the line. “I just need some turkey and roast beef,” I promised. “I swear I’ll to go to the end of the line afterwards.”

The “end” of the line stretched halfway through the store, past the milk and dairy section, snaking through the meats and beyond.  As quickly as possible—without crashing into a baby carriage or knocking over an old lady with her walker—I slid behind a young woman holding a small basket of items and nonchalantly photographing the surrounding chaos with her iPhone.  As I caught my breath, she snapped a selfie.

The powers-that-be at Food Emporium had obviously mandated all shoppers to stand in one gigantic, serpentine line—instead of the usual EIGHT smaller lines for each cashier. (Maybe they’d  imagined our progress would be more efficient in this new configuration?) We inched along.  Suddenly, I realized I’d better grab some more toilet paper.

“Don’t worry.”  The woman in front of me graciously offered. “I’ll save your place and pull your wagon behind me.”

I looked at her dubiously.  My wagon was heaped and overflowing. “Are you sure?”

She waved me off with a smile, and I sprinted across the aisles toward paper goods. No more Charmin Ultra Soft.  Our fannies would survive on Cottonelle.  Returning to the deli counter, the approximate area where I’d left my cart, I saw that the line had suddenly surged forward in my absence. Luckily, I recognized the kind woman who’d offered to help me still dutifully dragging my cart.  Slipping in behind her, I said “Thanks. I owe you.”

Approaching the cashier area, chaos truly reigned.  Some shoppers had carts piled high with groceries; others clutched baskets with less than a dozen items.  No one directed traffic.  Small orders did not go into an express line, but mixed with people like me who had huge orders for delivery. I felt sorry for folks with under a dozen items, but there was literally no room to maneuver my cart in order to let them go in front of me.  And even if I had somehow managed to let that person with only bread and milk slide into the line in front of me, well, wouldn’t the next shopper with only a few items want the same favor? And the next?

Looking at my watch, I realized it was much later than I’d thought.  My doctor’s appointment (already confirmed) was only fifteen minutes away. I didn’t want to be late because I knew the doctor and his staff would need to leave early.  I also knew that rushing down the sidewalk was a bad idea: I might slip, fall, and need an orthopedist appointment next. I shuddered at the vision of the orthopedist’s crowded waiting room, filled with my compatriots who also fell in the blizzard. . . .

Uh, wait a minute, you might say. What blizzard?

Indeed, what did happen to the bales of snow that were supposed to fall all night Monday and all day on Tuesday?  Looking out the window Tuesday morning, Henry informed me that there was not a single snowflake falling.  Oops, the metereologists at the National Weather Center had made a mistake.  The storm—named Juno—had taken a last minute turn eastward. Long Island had  been pounded with over two feet, and Boston’s suburbs got hit even worse.  But in New York City, only a measly 8 to 10 inches in total had wafted down.

“Sorry,” the metereologists said (with rather less enthusiasm than when they’d been reporting the oncoming storm).

“Better safe than sorry,” the politicians chimed in.

The New York Post called it: “the great snow job of 2015.”  Making fun of our mayor on the front page, the headline read: “De-Railed! Scandal behind subway shutdown.”  Further, the Post calledmeteorologists “forecast flubbers” who “flaked on this one,” and derisively referred to the “historic snowfail.”  Clearly, the editors had fun with their story (as I’m having fun with mine).  Call the storm what you will— I call it a boondoggle best enjoyed  from Florida, on a flat screen TV.