It is never too late to be what you might have been. –George Eliot 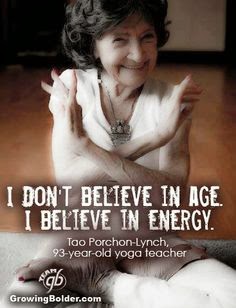 Isn’t it encouraging to know that even if you’re 50, 60 (or possibly older), you still have time become successful in a new career?  According to The New York Times, “Finding Success, Well Past the Age of Wunderkind” (3/21), you can succeed as writer, artist or even an athlete (!) considerably later in life than most people imagine. If you’ve never had time to write the great American novel or swim the English Channel, don’t assume you’re too late.  As an empty nester in my 50s about to publish my first book, I was delighted (and relieved) to read about 80 year old Lucille Shulklapper, who published her first book of poetry at age 60. How many 80 year old women do you know who are featured (and photographed) in a Times article— unless it’s an obituary? Happily, Ms. Shulklapper—a widowed grandmother of six—has already published four chapbooks and will publish her first children’s book, Stuck in Bed Fred early next year. (Bravo!)  Like me and many other women, Ms. Shulklapper had put aside her literary aspirations decades ago, when she got married, raised a family and took a steady job to pay her bills.
“I am living beyond my dreams,” Shulklapper told the Times from her home in Boca Raton, Fla. “I feel as though it’s my baby.  A long pregnancy and now its delivery, all 10 toes and fingers.” That’s EXACTLY how I feel about publishing my first book.

Most people believe that if you don’t write like Shakespeare, paint like Picasso or hike the Himalayas by the time you’re middle-aged, the odds are you’ll never do it. (I remember feeling tremendous anxiety about going to my FIVE year Vassar College reunion, because I hadn’t written the great American novel, climbed the corporate ladder (OR met Mr. Right).  And—truth to tell—I never attended a single reunion after the fifth because I didn’t feel accomplished enough to hold my own while chit chatting with successful classmates.  But now, like many other people my age, I’ve changed my mind about what it means to have a successful life.
Why now?  First, people are leading longer, healthier lives. The number of Americans age 65 and older increased tenfold in the last century, and the elderly are living longer, in more comfort and better health than ever before, researchers report.  Second, “retirement” has started taking on a new meaning. Increasingly, more people are reinventing themselves by starting new careers or recreating old ones which had been abandoned because of family obligations. In recent years, much has been written about the benefits of continuing to be active mentally and physically. Becoming an empty nester (but not yet decrepit) helped me see that kids DO (finally!) grow up; and, yes, time really DOES run out, even for us upbeat baby boomers.  So if not NOW, when?  What about embracing the idea that life can be just as rewarding—both creatively and emotionally— (if not more so) in the second half of our journey than the first?

Later-in-life triumphs are plentiful, according to numerous examples cited in The New York Times and on Google.  At age 56, Ernestine Shepherd started bodybuilding and running marathons. John Pemberton didn’t invent Coca Cola till he was 55.  (Thanks, John! And who came up with the formula for Diet Coke? Thanks to that person too!) Golda Meir was 70 when she became the 4th Prime Minister of Israel. Dyana Nyad swam from Cuba to Florida at age 64.  Harland Sanders didn’t build his KFC empire until his 60s.  Author of “Little House on the Prairie,” Laura Ingalls Wilder published her first novel at 65, while Frank McCourt, author of “Angela’s Ashes,” won his Pulitzer Prize at age 66. And let’s not forget about Grandma Moses, who started painting at 75.

A round of applause for late bloomers, please!
Karl Pillemer, a Cornell University professor of gerontology, says “we absolutely have to revamp this idea of a linear pattern of accomplishment. There are simply too many examples of people who bloom late, and it’s the most extraordinary time of their life.” Pillemer has interviewed more than 1,500 people age 70 and older for the Legacy Project at Cornell. Many respondents said they had embarked on a fulfilling endeavor after age 65.  “There was this feeling of somehow ‘getting it right’ at 50 or 60 or older,” he said, remarking that this conviction applies to creative efforts, relationships and work.
Of course there are age limitations for success in some fields.  According to researchers, crystallized intelligence (general knowledge) tends to grow over a lifetime, whereas fluid intelligence (problem solving) weakens after a person’s late 20s. Becoming a mathematician or a chess master after age 50 probably won’t work, because these fields require a lot of fluid intelligence from the outset, according to Dean Keith Simonton, psychology professor at the University of California, Davis and author of “The Wiley Handbook of Genius.” (Thankfully, I never liked math or had any interest in chess). However, Mr. Simonton remarks that “often people don’t even discover what they really want to do with their lives—or even where their talents might lie—until well past middle age. Grandma Moses is the proverbial case.”

What about the issue of peaking in a given field? According to David Galenson, author of “Old Masters and Young Geniuses: The Two Life Cycles of Artistic Creativity,” there are two types of thinkers in most fields: conceptual and experimental. Conceptual minds are usually younger and better with abstractions, while experimental thinkers work by trial and error, spending more time on gestation.  Such distinctions explain why Pablo Picasso—a conceptual artist—created his best work at age 26, whereas the experimental artist, Paul Cezanne, produced his greatest painting at 67.

To “peak” in a given field has a different meaning depending on who you ask.  Most people—at any age—will NEVER paint like Picasso or build a multi-million dollar corporate empire. On the other hand, Marjorie Forbes was a retired social worker who began studying the oboe at 68. At first she was happy “tootling away” in her Manhattan living room, but as her skills improved, Ms. Forbes had higher aspirations. After taking a music course at Oberlin College, she joined chamber ensembles at the 92nd Street Y and Lucy Moses, a community arts school in New York.  Now 81, she considers herself a “medium good amateur.” Ms. Forbes acknowledges that she “can’t make money doing what I’m doing, but I think I’ve reinvented myself to do something I’ve always wanted to do.” She adds, “I never dreamed I’d get to be as good as I am.”

How successful can you become at whatever it is you’ve dreamed of doing?  If you don’t try, you’ll never find out.  That’s why I finally started writing in my 50s, sending out my essays and stories to hundreds of (mostly obscure) literary magazines. After hundreds (yes, hundreds!) of rejections, my work has appeared in five publications.  Two years ago I started this blog, and I recently completed (the millionth draft of) my memoir. I don’t expect my book to make the Times best-seller list.  But if I can help some of the families struggling with kids on the autistic spectrum hold onto their hopes and not give up when the going gets tough, I’ll consider myself successful. And, by the way, yes, I’m planning on going to my next college reunion….
The time for action is now. It’s never too late to do something.
cenforce 100 mg buy Antoine de Saint-Exupery