In spite of severe writer’s block, this week I was (finally!) inspired to write about “acceptance”—a deceptively bland word with multiple meanings, often accompanied by a broad range of emotions.  Dictionary.com offered three definitions: “the act of taking or receiving something offered, a favorable reception, and the act of assenting or believing.”  According to these definitions, feelings surrounding acceptance can run the gamut from pride and joy to bitterness and disappointment, with ambivalence or a mere shrug in between. Right now I’m experiencing some joy. My essay, “Separate and Together,” has finally been published in Kaleidoscope, an on-line magazine devoted to exploring disability issues. Three cheers for this acceptance!

Honestly, I’d almost forgotten to anticipate the happy event, because my essay had been accepted way back in 2013. To be fair, the editor of Kaleidoscopehad warned me that “Separate and Together” might not find its way into the magazine’s on-line pages until 2015—when she could “fit it into an issue with the right theme.” (At the time, 2015 seemed impossibly far off.)  So what’s the “right theme” for a story about an unusual b’nai mitzvah, featuring my daughter, Sarah, on the autistic spectrum and her neurotypical twin brother, Max?

“Journey to Acceptance” is the title of Issue 70 of the e-zine. Okay, it’s obvious how my essay fits the acceptance theme.  Two extraordinarily different 13 year old twins celebrate a milestone moment: coming of age in the Jewish tradition. Somehow, both the ceremony and the party were a success, despite Sarah’s challenges.  What I was curious about was how the other literary offerings in the acceptance themed issue “fit” with “Separate and Together.” In other words, what company was I keeping?

As it turned out, there was another essay by a mother whose son was on the spectrum, and had Asperger’s Syndrome. In this essay, the mom finally accepts that her son will always be different from his neurotypical peers, and further, both mother and son are comfortable with that truth.  In fact, it almost seemed like the mom preferred to have a son who was socially isolated, but happy playing video games alone at home, instead of mother and son both struggling for him to change. However, I couldn’t help wondering if a greater effort on her part would have helped him to one day become a happier, more independent adult with friends and a social life.

Honestly, I NEVER felt content about Sarah staying home, playing alone. Does this mean I lack acceptance? And if so, is that necessarily a bad reaction? I have always wanted my daughter to make friends and participate in a social life—not just so she could fit into the neurotypical world, but also because that’s what SHE wanted so badly. In some ways, I’m not that different from the mom of the Asperger’s boy in the e-zine (or any other mom, for that matter).  We moms want our kids to be happy. The video-game playing boy may have found comfort and happiness in his own world, but Sarah had longed for friends, feeling lonely and jealous of her twin brother, (who’d always been very popular.) 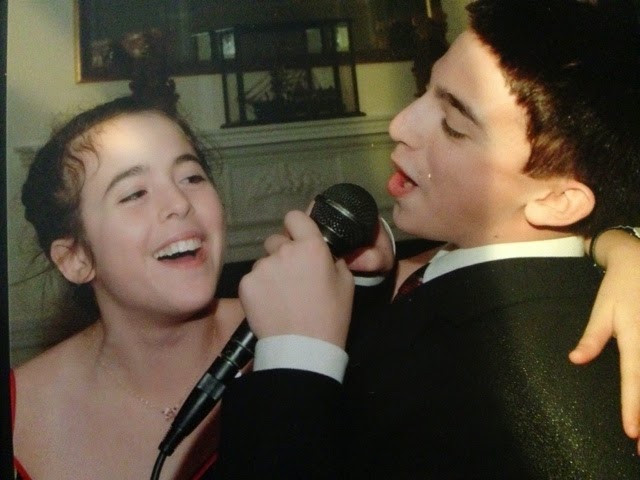 Now, over a decade since the b’nai mitzvah, Sarah has an active social life with lots of friends.  She’s even had a serious boyfriend for over a year; in that sense she’s “keeping up” with her twin brother Max, whose relationship has also continued beyond a year. Of course, my twins’ lives are every bit as different now as when they were thirteen. Max lives with his girlfriend; both of them work, and they’re (mostly) self-sufficient. On the other hand, neither Sarah nor her boyfriend have managed to find paying jobs; both receive social security payments, and neither one is truly independent, although Sarah’s boyfriend is closer to that goal.

It’s difficult for me to “accept” that Sarah will never be fully independent; especially since independence is what my daughter yearned for since she was a little girl. Sadly, I must accept the fact I will not live long enough to teach her all the things she needs to learn in order to function entirely on her own. Even more painful—yet appropriate—is that Sarah no longer wants me to teach her, now that she’s “a grown-up.” Standing silently on the sidelines is difficult for me. I have many miles to go on that particular “journey to acceptance.” Right now, my job is to help Sarah find the life skills support she needs from other adults (who are not her mother) and whose help she’s willing to accept.  With each passing year, I must increasingly let go, step back, and admit that I can no longer be the micro-managing mom who keeps Sarah safe in the world. That journey to acceptance is still in progress.

Nevertheless, as time passes, I have found that acceptance offers joyful and unusual moments.  My twins’ b’nai mitzvah was magical. So was Sarah’s college graduation, and her co-starring role in “Keep the Change,” a short film about young adults on the spectrum, struggling to make a romantic connection. As long as I remember that my daughter and I have both done our best, (exceeding many professionals’ predictions and expectations!), I can be at peace with the limitations on Sarah’s success and independence. Do I really accept the disappointment that goes with those limits?  Not unless I can keep on stretching them just a little. . . .