Feminism – The Sound and Fury

Despite harassment and on-line abuse, feminist writers will NOT go gently into the night. Last week The Washington Postran an on-line article about prominent female authors, bloggers, and speech makers who have been subjected to hateful name calling and death threats—not just once in a while but every day, around the clock.  Jessica Valenti, author of five books and founder of the blog Feministing.com, admitted that if she could start over, she might prefer to remain completely anonymous.
“It’s not just the physical safety concerns, but the emotional ramifications of constant abuse,” Valenti tells young women aspiring to write about feminism.

While cyberspace offers feminists unlimited opportunities to speak their minds, technology also enables misogynists and critics to vent their fury and hatred easily and publicly.  Men’s rights groups such as A Voice for Men, the misogynist Reddit Forum, The Red Pill, or even Twitchy, (a right-wing Twitter group) are barraging feminists with so much  vitriol that some writers have withdrawn from the internet. Abortion rights activist, Lauren Rankin, stopped writing online and (mostly) on Twitter because the continuous on-line attacks against her became so stressful and exhausting.  Rankin continues her work as a board member of a reproductive rights non-profit, and she still acts as a volunteer clinic escort, but she no longer engages on the internet.

On the other hand, famous feminist Gloria Steinem continues to speak out despite—or perhaps because of—the angry backlash.   At Johns Hopkins’ Foreign Policy Forum this week, Steinem addressed most of the hot-button issues. Violence against women and reproductive control are root causes of the world’s biggest problems, according to Steinem. A self-described “hope-aholic,” she  says “humans are linked, not ranked” and that “nature is a circle, not a hierarchy.” Steinem believes the human race is like a butterfly with two wings (male and female) and can’t fly if one wing is broken.  Taking the long view, she acknowledges that changing society is a slow process that may take a hundred years but WILL happen…. Bravo, Gloria Steinem, for pushing feminism forward with such eloquence.

Sometimes feminist support pops up unexpectedly.  At the 2015 Academy Awards, Patricia Arquette, recipient of the best supporting actress title, went beyond the usual boring thank-you list.  Capitalizing on her moment before a world-wide television audience,  Arquette demanded equal pay for female actresses, on a par with their male counterparts in this country. Meryl Streep—along with other wealthy and powerful actresses—rose from their seats, to applaud and cheer loudly for Arquette’s message.  Some of my friends might argue that—feminist slogans or any political messages—should not be expressed at the Oscars. What do you think?

I’m happy Patricia Arquette kept her speech short, and since I happen to agree with her values, I didn’t mind the mini-departure from award etiquette. Besides, she wasn’t talking about abstract ideas or an issue of interest to a limited few.  I found the actress’s brief and unexpected exhortation on behalf of women(relevant to half of the audience, at least!) refreshing and inspiring as well as entertaining, a bright moment during  the three and a half hour marathon of vanilla acceptance speeches.  Better yet, Arquette was able to speak her mind safely and leave the stage with her golden statuette free of the harassment many feminists endure 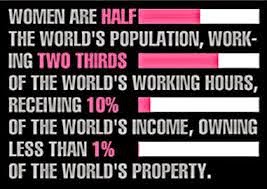 Some feminist battles are fought in murky territory. Monday’s New York Timesdescribes a “he said, she said” case in the article, “A Silicon Valley Harassment Trial Casts a Long Shadow.” Former employee Ellen Pao is suing a prominent venture capital firm.  Pao contends that a married colleague pressured her into having an affair with him, and then retaliated against her after she ended it.  Pao claims she suffered discrimination and received undeserved poor reviews which ultimately led to her dismissal.   The venture capital firm fired back, saying the affair was consensual and no discrimination occurred.  Furthermore, the firm contends that Pao “lacked the ability to lead others, build consensus and be a team player, which is crucial to a successful career as a venture capital senior investment partner.”

Who will the jury believe?  The answer may have far reaching effects.  Many women in technology feel Silicon Valley discriminates against them, failing to hire, promote or take them seriously.  Confronted daily by sexism and harassment, these women are not treated with respect and become discouraged.  If the jury decides the venture capital firm is guilty of discrimination, the verdict may be seen as a broad indictment of the high-tech world.  On the other hand, a dismissal might strengthen the argument of those who insist gender issues are exaggerated.

Perhaps the most perplexing piece of the feminism puzzle unfolds while trying to understand why three teenage girls would leave home to join ISIS and become terrorists. Why would anyone join an organization that would strip them of all human rights?  Yet three British teenagers—two 15 year olds and a 16 year old—were pictured on the front page of The New York Times (2/25) departing London’s Gatwick Airport on a flight to Turkey! It is believed they traveled to Syria to join the terrorist group, known as ISIS or ISIL.  These girls are NOT impoverished or uneducated; nor are their families proponents of radical Islam. On the contrary, the families of these girls are ashamed and horrified. Classmates describe the runaway girls as “studious, argumentative and driven.” A fourth girl from the same school who left in December was also described as “very intelligent, very liked, very bubbly, kind, caring.” (?!)

Why would (seemingly) intelligent and educated young women run off to join a violent Islamic State? Is this an extreme—and perverse—form of teenage rebellion for these girls?

From the radicals’ point of view, it makes sense to recruit girls at younger ages than their male counterparts; a fifteen year old girl makes a good (compliant, disempowered) wife. My question is why would a girl WANT to marry a fighter in a foreign country and become part of a violent culture that subjugates women?  Instead of fighting FOR freedom they are fighting AGAINST it.  I’m completely stumped.

Somehow we MUST develop a powerful antidote to whatever crazy propaganda ISIS is using to lure young women into its evil clutches. Feminists around the world need to be part of the solution.  Internet intimidation should not dissuade us from speaking out.  After all, the internet has proven to be a powerful weapon in the hands of ISIS recruiters.  We women MUST learn to communicate as safely and effectively in cyberspace as our enemies.  We can do it!  And if all else fails, women still have one very significant advantage.  We are mothers; and as mothers we can teach our girls AND boys to love and respect each other as equals from the moment they leave our womb.